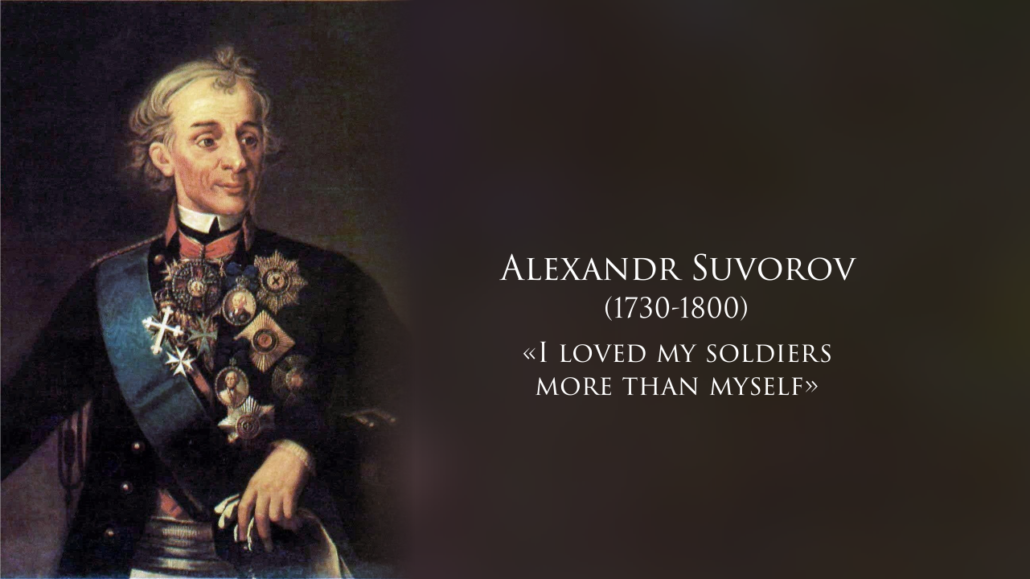 “I loved my soldiers more than myself”

Alexandr Suvorov, the Commander-in-chief of the Imperial Russian Army in the 18th century, is a powerful example of virtuous leadership in the military.

Suvorov is one of the few generals in history who never lost a battle. He remained undefeated in over 60 large battles always while being at a numerical disadvantage.

Suvorv practiced magnanimity and humility, which are the virtues specific to leaders. He instilled in his soldiers a sense of self-worth and national consciousness: this is magnanimity. He took care of his men better than any other commander of his time: this is humility. Suvorov took excellent care of his army’s supply lines and living conditions, drastically cutting the incidence of illness among his soldiers. He communicated his ideas to the troops in a clear and understandable way. Suvorov was much admired by his men.

Suvorov did not like preconceived ideas. His words, “Achieve victory not by numbers, but by knowing how,” were revolutionary. His daring disregard of current military theories was astonishing. His way of waging wars based on speed and mobility was absolutely new. “To surprise the enemy is to defeat him, he said… Judgment of eye, speed and attack are the basis of victory… Swiftness and impact are the soul of genuine warfare. A good solution now is better than a perfect solution tomorrow”.

Suvorov practiced the virtue of prudence or practical wisdom. When it was necessary to plan a battle, he reached deep within himself, and made precise, complex, strategic plans in conditions of uncertainty. During actual battles he made decisions in a flash, quickly choosing among options that had been worked out earlier. He was always up to the situation, took the initiative, and foisted his plan of action on his opponents.

Suvorov’s own career easily places him in the top rank of history’s great military commanders. Perhaps his greatest achievement was in the War of the Second Coalition, one of the French Revolutionary Wars. Leading the Austro-Russian forces, he succeeded in driving the French from northern Italy.

His marvel of a strategic retreat through the Alps while fighting off the French cost him one third of his army, but gained him Europe’s admiration and the top rank of Generalissimo.

In the Franco-Russian War of 1812, the disciples of Suvorov used his military strategy for the destruction of the enemy’s main power. As a result, Napoleon was forced to retreat with hardly a hundredth of his original army.

Suvorov practiced self-control. He was a powerful example of detachment from material things. He had a great simplicity of manner, and while on campaign lived as a private soldier, sleeping on straw, contenting himself with the humblest fare, and refusing to bundle up against the coldest weather. He shunned all comfort, preferring to lead a camp-like life even away from battlefields.

Suvorov practiced the virtue of justice. He protested against senseless cruelties inflicted upon the population in conquered countries, against the Prussification of the Russian army, and against the social, economic, and political exploitation of the Russian masses. “I have shed rivers of blood”, he said, “and this horrifies me, but I love my neighbor; I have brought misfortune to no one. I have never signed a death sentence, I have never crushed a beetle.”

One of the most educated people of his time, Suvorov was described by several of his contemporaries as one of the most extraordinary men of the century.

Suvorov is a powerful model of virtuous leadership in the military. In a letter Lord Nelson wrote to Suvorov we read: “I am being overwhelmed with honors, but I was today found worthy of the greatest of them all: I was told that I was like you. I am proud that, with so little to my credit, I resemble so great a man.”