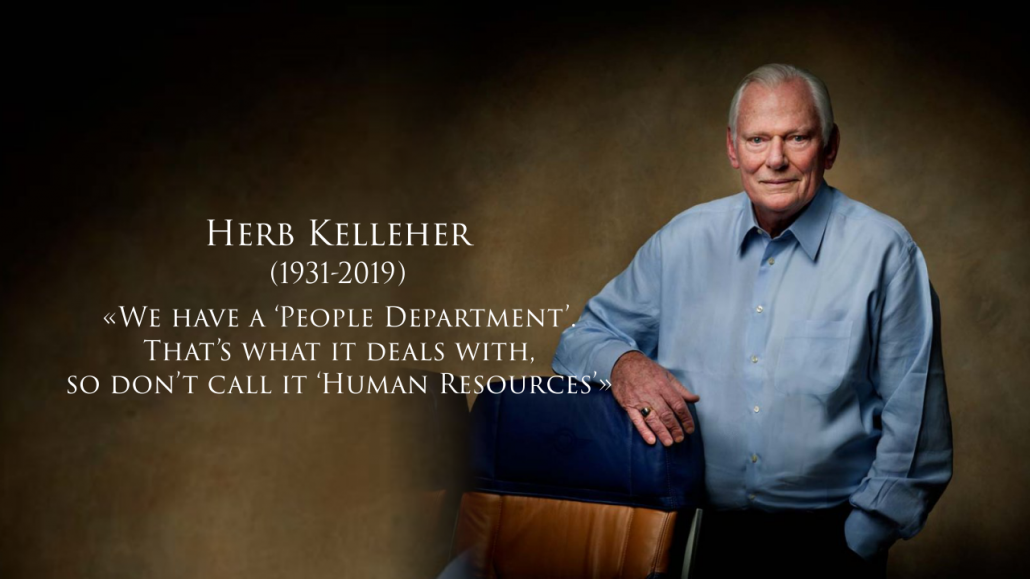 “We have a ‘People Department’. That’s what it deals with, so don’t call it ‘Human Resources’”

Herb Kelleher, the co-founder and former CEO of Southwest Airlines, is a great example of a businessman who practiced magnanimity and humility – the specific virtues of leaders.

Kelleher exemplified magnanimity. Magnanimity is about dreams, visions and missions. For Kelleher, the higher calling was to make air travel affordable for everyone, to open up the skies, to give ordinary people the chance to go places and do things they had never dreamed of. In 1971, in Texas, Kelleher presented a bold new vision and mission for his company that called employees to a higher purpose. Magnanimity was at the core of it.

Magnanimity calls for originality. Kelleher was convinced that “fun” had to be an essential element of the airline’s culture and values. “Our focus, he said, has always been on the well-being and the joy that we want our people to experience.” Humor is a core value at Southwest Airlines. Its employees build processes and customer interaction around humor. They hire for humor and inject it throughout their operations.

Kelleher succeeded in making the employees of Southwest Airlines feel intellectually, emotionally and spiritually connected to this great vision full of humanity, simplicity, humor and altruism.

Humility is the ambition to serve. Kelleher served his people. He would say: “The general office is at the bottom of the pyramid, not the top. Our job at the general office is to supply the resources that our frontline fighters need in order to be successful… We have a ‘People Department’. That’s what it deals with, so don’t call it ‘Human Resources’ – that sounds like something from a Stalin five-year plan.”

Kelleher served his people by bringing out the greatness in them. He encouraged and applauded out-of-the-box thinking from everyone at the company, from flight attendants to top-level executives… If a Southwest employee submitted an idea, he or she could expect an answer within a week.

“You have to entertain a thousand ideas for every good one that you get,” said Kelleher. But if you start turning them down just to turn them down, because you can’t be bothered and don’t have time, you never get a great one.”

Kellerher established a culture of empowerment and collaboration where people felt permitted to make decisions and show initiative beyond the scope of their day-to-day responsibilities.

“We want all our people to be leaders, he said. I don’t care whether you’re checking bags or loading them in the bin or no matter what you’re doing. You’re setting a standard for other people. You should be inspirational.”

Kelleher said, “We devote an enormous amount of time to making sure we get people who are other-oriented, who have a servant’s heart, who enjoy working as part of the team… And then we try to maintain their interest, their esprit de corps by constantly communicating with them and honoring them.”

Kelleher multiplied his leadership in others and made it possible for his organization to continue its mission beyond his retirement. Continuity, along with empowerment, is a sign of true humility. Kelleher did not make himself irreplaceable. He created the conditions for others to bring his work to a successful conclusion. He paved the way for succession.

Kelleher did not practice only the virtues specific to leaders. He also practiced the basic virtues of prudence, courage, and justice, which are the foundation of leadership.

Kelleher practiced prudence, which is also called the virtue of practical wisdom. His leadership principles, in fact, are full of wisdom.

He would say: “Employees first, customers second and stakeholders third. Your people come first, and if you treat them right, they will treat the customers right, and the customers will come back, and that will make the shareholders happy. It’s simple, it’s not a conflict, it’s a chain… The business schools used to think it was a conundrum: which comes first, your employees, your customers, or your shareholders? And I explained it, it wasn’t an enigma at all.”

Kelleher treated his employees well, and his employees in turn treated the customers well. As a result of such a culture of service the company had the best customer satisfaction record of any airline in America. So you did not just get low fares, you also got wonderful customer service.

In addition to practicing prudence, Kelleher also practiced the virtue of audacity. In 1971, everybody in Texas would tell him that they thought he was crazy to create Southwest Airlines. Kelleher needed boldness to buck popular opinion.

If audacity is active courage, endurance, which Kelleher also practiced, is passive courage. He was patient and persistent. There were airline monopolies in Texas which Kelleher consciously sought to destroy for the good of the flying public. The monopolists were incenced. They brought legal action against Kelleher tying him up in 31 judicial and administrative proceedings over a period of fours years in an effort to impede competition.

After September 11, 2001, Kelleher maintained the course he had set for his company, and did not compromise his principles in the face of unprecedented difficulty.

Kelleher also practiced justice, which is a virtue of character. He gave employees and customers their due by building a culture that put employees ahead of customers. “The customer, he said, is sometimes wrong. We don’t carry those sorts of customers. We write to them and say, ‘fly somebody else. Don’t abuse our people’.”

In the wake of the terrorist attacks of September 11th, Southwest did not follow other arlines in laying off employees or cutting their pay. On the contrary, Southwest has never had an involuntary layoff in its history. The company sacrificed profitability during the bad times in order to provide its people with job security.

“We sold an airplane instead of laying anyone off at Southwest Airlines”, said Kellerher. “So our fleet went from four to three airplanes. We managed to fly the four airplanes scheduled with three airplanes which is basically how the quick turns at the jetway originated. We used to turn airplanes around in ten minutes when the standard in the industry was probably fifty”.

Kelleher practiced justice: he gave his employees their due by helping them find meaning in their work, and he gave the customers their due by improving the quality and lowering the cost of air travel.

Herb Kelleher was a very successful businessman. Southwest Airlines has grown into the third largest carrier in the world as measured by the number of passengers, and the largest for passengers traveling exclusively to the United States. Southwest is also the only major American passenger airline that has consistently managed to turn a profit since September 11, 2001. Southwest Airlines’ culture of magnanimity and humility – of greatness and service – has given it a major competititve advantage. This culture was embodied first and foremost in its virtuous leader – Herb Kelleher.