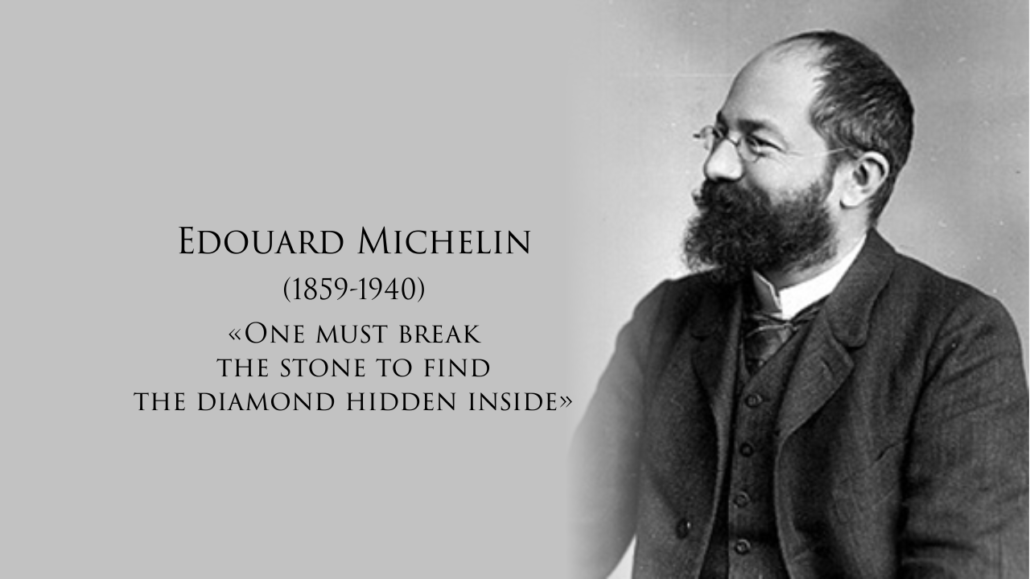 “One must break the stone to find the diamond hidden inside”

Edouard Michelin, founder of the market-leading Michelin Company, is a wonderful example of a businessman who practiced the virtues of magnanimity and humility, which are the virtues specific to leaders.

Six years after he created the company in 1889 in France, Michelin invented and brought to market the first tire for the automobile industry.

In the 1930’s Marius Mignol, a worker without formal education, was hired to work in the company’s print shop. But Edouard Michelin had other plans for him. He told the firm’s head of personnel: “Don’t judge by appearances. Remember that one must break the stone to find the diamond hidden inside.”

Mignol was re-assigned to a purely commercial part of the business involving international markets. One day, Michelin noticed a strange-looking slide ruler on Mignol’s desk. It was a device Mignol had invented to rapidly convert foreign exchange rates into the local currency. Edouard exclaimed: “This man is a genius!”

To study variations in heat inside the conventional tire, Mignol invented a “fly trap,” a tire whose sides were replaced by metallic cables with plenty of space between them. The resulting “radial tire” (invented in 1941) proved revolutionary. Mignol ended up becoming the tire engineer of the century. Because of its significant advantages, the radial tire spread quickly in Europe and Asia in the 1950s, and in the US in the 1970s. Radial technology is now the standard design for essentially all automotive tires and the Michelin company is the world’s largest tire company.

Edouard Michelin was a true leader. He  wanted to bring out the greatness in Marius Mignol and in each of his employees. To his chief of staff he said: “Remember that one must break the stone to find the diamond hidden inside”. This is exactly what leadership is about. Leaders help the people they serve to discover their talents, multiply them and put them at the service of humanity.

For Marius Mignol, who invented the radial tire, Edouard Michelin was more than a boss. He was his mentor, his teacher, his father. Edouard the boss became the servant of Marius the employee. He helped him discover his talents and put them at the service of the organization, the country, the whole world. Thanks to Edouard, Mignol discovered who he was, and he found a meaning in his work and in his life.

Edouard Michelin was not just a manager. He was also a great teacher and a great coach. He was an exceptional business leader.