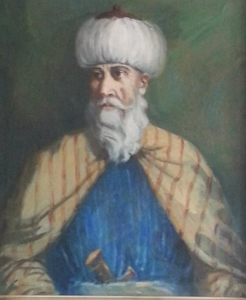 “I did not come to rule, I came to protect Lebanon”

Fakhreddin II is arguably one of the greatest princes to have ruled in Lebanon during the Ottoman occupation. Born in 1572 to a mother with an outstanding personality and a father who inherited the kingdom from his own father, Fakhreddin II had to ascend to the throne at an early age.

At the age of 12, Fakhreddin’s father died and, as was customary at the time, the rule of Mount Lebanon was now his. Seeing how young he was, and with the risk of him being killed, he and his brother were sent into hiding under the custody of their uncle until Fakhreddin was old enough to step into his father’s shoes. During that time, his mother held the heritage on her own with the help of the council.

Fakhreddin II came to power in Mount Lebanon in 1590 at the age of eighteen, and thus opened a new page in the history of modern Lebanon. He was characterized as a skilled politician, masterful in planning strategies and knitting relations. Being Druze, he benefited from his good relationship with the Maronites, worked on reconciliating with the Shiites, and subdued the Sunnis of the Supreme State sect. He was also praised for his just dealing with the oppressed. He had observing eyes in Astana and in the palaces of the Pashas and the role of followers. Furthermore, he established strong relations with the rulers of the European countries.

Domestically, he bolstered the military force of Lebanon, whose army reached the number of 100,000 soldiers. It is with this army that he fought numerous battles against the Ottomans who practiced dictatorship, thus disposing of their tyranny. He travelled back and forth to Europe seeking the help of the Grand Duke Kozma II, the Pope, and King of Spain in order to prevent the outbreak of a war back home. He also purchased weapons, ammunitions and called for experts from Europe. In times of war, he showed prudence, as he used to ask the council for advice and aimed at settling issues through agreements before opting for battle. He delegated responsibilities and trusted his inferiors and particularly trusted the advice of his councilor who has been by his side since he was a child in hiding. Eventually crisis struck in Europe and it became difficult to receive more help. Increasingly discouraged by his hopes of establishing a European political alliance, Fakhreddin returned to his beloved Lebanon to resume his role as a thorn in the side of the Ottoman emperor. After many battles and some victories, he and his sons finally retreated to a cave in the mountains, where they were discovered by the merciless governor of Egypt, Ibrahim Pasha, carted off to Istanbul, and eventually beheaded.

Fakhreddin had a sound conscience and was both modest and pleasant, honorable and respectful. He was decent even in his anger and had a good reputation. He listened and dealt justly with the oppressed and established their rights. He was characterized by his generosity, strong determination and a solid resoluteness. He was also known for his good management.

Fakhreddin aimed at restoring unity to the Lebanese provinces in the purpose of achieving the Greater Lebanon, through merging the provinces together. He expanded over land and sea.

He spread a sense of national spirit, making Lebanon a safe and stable region. He always signed as “Emīr of Lebanon”, after rejecting the title of “Emīr of Land”, given to him by Sultan Mourad IV for the purpose of making the name of Lebanon disappear gradually. The progenitor of the “Mount Lebanon Emirate,” he is credited by most historians with being a primary influence on the formation of Lebanese national identity, which is still as fragile and diverse as it was in his day.

A great and avant-garde trait of Fakhreddin was that he treated religious sects equally, respecting their religions and beliefs. He chose governors and writers from Lebanon. Men from different communities joined the consultative council as well as the army. There was controversy regarding his religious identity with each religious community claiming his affiliation to it. He practiced the obligation of pilgrimage twice in his life in 1590 and in 1591. It was also related that he converted to Christianity in 1633.

Fakhreddine intended, not only to promote the wealth and fortunes of Lebanon, but also to revive agriculture, industry and trade. He encouraged the Lebanese people in the industry who mastered the manufacturing of woolen, cotton and silk clothing, oil, soap, wine and many others. He promoted trade with Europe, encouraged the commerce sector and supported merchants by offering facilities and providing them with privileges. At the time, political regulations stated that only Muslim sects could own piece of land, but Fakhreddin gave land to the Christian farmers who, as he observed, were excellent at doing their job. He practiced fraternal humility by giving the capacity for others to realize their potential.

As a result of his travelling, he initiated cultural and intellectual renaissance by bringing back artists and experts to Lebanon. Fakhreddin had a strong tendency to sciences such as theology, astronomy, chemistry, political administration, and historical sciences. He also liked poetry, music, painting and literature and would benefit from their wisdom. He used his passions to the fulfillment of the mission at hand. When he saw the weaknesses of the cultural level in Lebanon, he sent his Maronite students to Rome where the Maronite church aims to teach the clerics foreign languages and sciences. The student delegations continued during his term and came back to Lebanon to found schools for the young and a printing house in the monastery of Qozḥaya, in the North. He helped in establishing the press in Beirut, publishing books, and opening schools. He also constructed bridges, built roads, and set up canals for drinking and irrigation. He constructed churches, mosques, mansions and gardens. All his works were preserved in a written form in order to refer to it when needed. He prepared for the coming rulers, knowing continuity was inevitable.

Fakhreddin has proved to be a magnanimous person. His magnanimity was evident in his dreams, his visions and his sense of mission. He attempted to reconquer territory and unite the land for the people regardless of their sects and religion. He fought for the safety of his people and worked for the prosperity of Lebanon. People were loyal to him and loved him because he was less about display of power and more about empowerment of others and his country. He lived in the service of the people through his mission and in the purpose of achieving the Greater Lebanon.

A battle worth mentioning would be the Battle of Majdel Anjar: It took place on the first of November 1623 and ended with the victory of Fakhreddin over the Ottomans. Although Ottoman troops outnumbered the Lebanese forces by more than two to one, Fakhreddin was nevertheless victorious. The people were loyal to him and it was an honor to fight for him, but mostly for their country. He held captive the Pasha himself and treated him well during his captivity, which made him recognize Fakhreddin’s rule. Fakhreddin had learned a lot from his mother, and she had told him once that “the strongest was the one capable of forgiveness”. Fakhreddin forgave and eventually released the Pasha. This battle points out a certain form of courage by staying the course and resisting pressures of all kinds. Even though he was severely outnumbered by the Pasha’s army, he still managed to secure victory. Adding to that, he refused to convert to Islam which would have potentially prevented his execution.

– Humility (serving others):  He built countless palaces, bridges, roads, churches, mosques, canals for drinking and irrigation. He supported the merchants by offering facilities and providing them with privileges. To practice fraternal humility is to bring out the greatness in others, to give them the capacity to realize their human potential.

– Magnanimity (striving towards great things): He aimed at keeping peace in Lebanon and bring prosperity to the people. He disposed of the tyranny of the Ottomans. He built strong relations with local leaders as well as European leaders to help prevent an outbreak of war in his region. He sought to unify the people of the region under one rule regardless of their religious believes. In his time in Europe he was influenced by renaissance art and incorporated it in Lebanese architecture. Leaders are magnanimous in their dreams, their visions and their sense of mission; also in their capacity to challenge themselves and those around them.

– Justice: Many/most historical accounts describe him as being a fair and just leader. Before leaving for Europe, he paid his soldiers two-year wages. He listened and dealt justly with the oppressed and established their rights. Justice impels one to give each person his/her due.

– Self-mastery: He was decent even in his anger and honorable and respectful. Seems like he is quite multi-talented. He was interested in poetry, literature (translated books from Italian), painting, and science. He learned from the wisdom and beauty presented in literature, sciences and arts.  Self-control subordinates one’s emotions and passions to the spirit and directs their vital energy to the fulfillment of the mission at hand.

– Courage: It was clear in all his battles and relations but specifically in the battle of Anjar where he was severely outnumbered by the Pasha’s army but still managed to secure victory. Also, he refused to convert to Islam which would have prevented his execution. Courage permits to stay the course, to have endurance and audacity.

– Prudence: He used to ask the council for advice and aimed to settle things through agreements before opting for battle. Prudence increases the leader’s ability to make right decisions.

“I did not come to rule, I came to protect Lebanon” – Fakhreddin al-Maani II

(The prince himself told this to the King of Spain when he was offered to stay in Spain and to rule Spanish provinces.)

“What do I want from the Sultan? I am satisfied with the food and water, and I look at my mother and my family, if they disapprove, the mountains are wide, and if the mountains can’t fit us then the world is wide.” – Fakhreddin al-Maani II

“We are small, but in the eyes of the enemy we are big
You are Poplar wood and we’re the saw” – Fakhreddin al-Maani II

(This last quote is written as a verse from a poem, in an Arabic traditional way and was literally  translated to English.)