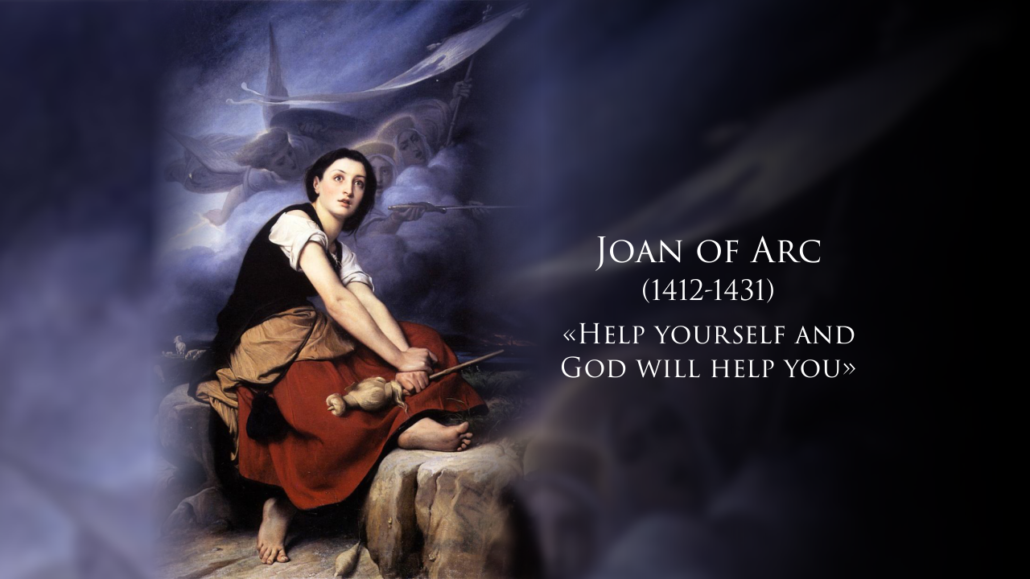 “Help yourself and God will help you.”

Joan left home to begin her mission when she was 16 years old.  At the age of 17, she became the supreme commander of the French army. She was burned at the stake at the age of 19.  Joan was born to fight, to win, and to then “disappear.”

She left hearth and home because she believed that God’s will took precedence over her personal comfort.  She did so against the opposition of her parents, whose will, in her view, took a back seat to God’s. She drove the English out of France – although she was born not in France, but in Lorraine – because she understood it was God’s will that she do so. Doing God’s will was Joan’s obsession.

Joan had only a year in which to accomplish her mission.  She worked with astonishing intensity as she transformed the army from a fearful, desperate and pusillanimous mob into a daring and magnanimous fighting force. She changed the hearts of her countrymen, and thus engendered the spiritual revival of a nation that had descended into darkness. Joan was a magnificent leader: she achieved greatness by bringing out the greatness in others.

She taught her people to rise above their petty concerns and provincialism. After Joan, the people of France began to consider themselves French and not primarily Armagnacs or Burgundians. Joan is the very embodiment of France. If Joan of Arc had not done what she did, if she had not been who she was, France would not exist.

Joan of Arc was a woman of action. In the words of G. K. Chesterton, “Joan of Arc was not stuck at the cross-roads, either by rejecting all the paths like Tolstoy or by accepting them all like Nietzsche. She chose a path, and went down it like a thunderbolt (…). Tolstoy only praised the peasant; she was the peasant. Nietzsche only praised the warrior; she was the warrior. She beat them both at their own antagonistic ideals; she was more gentle than the one, more violent than the other.”

Joan of Arc was also a contemplative soul. In fact, one of the most original aspects of her personality is the bond between mystical experience and political mission. Joan was a doer, but she never did things just for the sake of doing them; her doing was always an extension of her being, the outgrowth of her contemplation of her exalted vocation. She possessed a deep sense of personal dignity which is proper to leaders. Leadership begins with an exalted vision of self. Only then does it acquire a vision of what it seeks to achieve.

She was illiterate, but the words she spoke were not only wise, they transcended wisdom: they were poetry. The simplicity of her rebuttals to the unjust accusations leveled against her remain astonishing 500 years later. When the tribunal accused her of having disobeyed her parents by leaving home and embarking on her mission without their consent, Joan gave a magnificent lesson in basic theology: “Were I to have one hundred fathers and one hundred mothers, and were I the daughter of a King, I would have gone because God commanded it.” Tradition applies to Joan of Arc these words of the Book of Wisdom: “Through Wisdom I shall have glory among the multitudes and honor in the presence of the elders, though I am young. I shall be found keen in judgment, and in the sight of rulers I shall be admired. When I am silent they will wait for me, and when I speak they will give heed; and when I speak at greater length they will put their hands on their mouths.”

She fought and won without ever killing anyone. In battle, she carried the standard under which she fought, but did not brandish her sword. She was not the heroine of a modern action movie. She was a true woman, not an ideological construct.

In his book “The Birth of Britain” Winston Churchill says that “Joan of Arc was a being so uplifted from the ordinary run of mankind that she finds no equal in a thousand years.”

God was “inebriated” when he created Joan of Arc. She is a unique masterpiece. She cannot be compared to anyone.  She was so mystical and yet so practical, so feminine and yet so full of manly virtues, so impetuous and yet so wise, so close to God and so close to men.