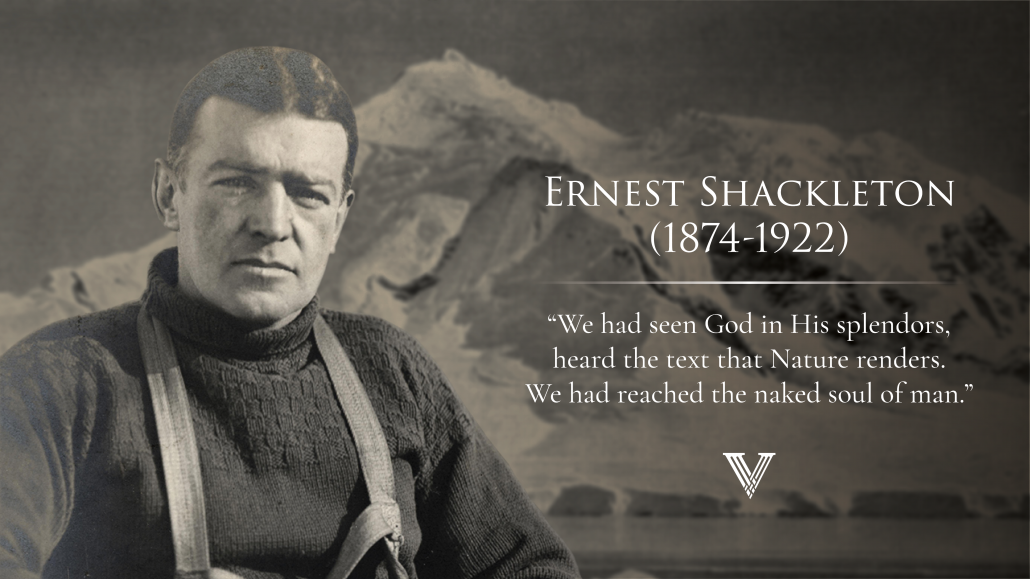 Earnest Shackleton departed on a sailing adventure with his team on December 5, 1914. Little did he know that this expedition’s goal will shift from achieving his dream of crossing Antarctica via the south pole to staying alive. After they set sail on the ship Endurance, Shackleton and his crew of 28 men would not set foot on solid land for an astonishing 497 days; a voyage that would challenge their spirit and their lives.

Earnest grew up in London and was passionate of sailing. His father, who was a doctor, urged him to follow in his footsteps and go to medical school. Instead Shackleton joined the merchant navy at the age of 16, achieved the rank of first mate by the age of 18 and was eventually promoted to the royal navy by the time he was 24 years old. Being a certified master mariner, he sailed for 4 years and gained skills and experience. One of the trips he took was a difficult trek to the South Pole, with explorer and British naval officer Robert Falcon Scott. They travelled closer to the pole than anyone before, but Shackleton fell ill, and they had to return home. This expedition, however, ignited in Shackleton an obsession to reach the Antarctic, but his attempt fell short due to brutal conditions. Eventually, in 1911, Norwegian explorer Roald Amundsen achieved what Shackleton could not, setting foot on the south pole, and shattering Shackleton’s dream of doing it first. The achievement forced Shackleton to set his sights on a new mark: crossing Antarctica via the South Pole.

Departing on the first of August 1914, Shackleton had a bold, potentially history-making goal: he and his team would be the first to walk across the continent, starting from the coast of the Weddell Sea, traversing the South Pole and ending up at the Ross Sea. The Endurance set sail towards a whaling settlement on South Georgia Island, the last southern port of call before the Antarctic Circle. Upon their arrival there, they were warned of unusually thick pack ice that could trap the ship if the wind and temperatures shifted suddenly. Refusing to postpone, Shackleton commanded the ship to navigate. As they were getting in sight of the Antarctic mainland in January 1915, harsh winds and cold temperatures caused packs of ice to trap the ship, just as they had been warned. After more than a month in the pack, he decided to try to move the ship manually across the water and through the ice that was 18 inch thick. The ship did not move very far, and with that, the grand expeditionary plan was done for; the new goal was to hunker down and prepare to spend the winter in the ice. Sled dogs were moved off the ship and into igloos on the ice, and the ship was converted into a winter habitat.

Shackleton feared the potential effects of idleness, ennui, and dissidence among his men more than he did the ice and cold. Therefore, to maintain morale, the crew exercised on the ice, played soccer, and other games indoors. They read poetry, wrote in their journals and interacted with each other. After dinner singsongs and party games were arranged and birthdays were celebrated. The dogs and puppies present on board became like pets to many of the men. Shackleton also kept a strict routine for meals and required that each man maintains his ordinary duties. Scientists shared the same chores with sailors and sailors helped take scientific readings. They swabbed decks and collected specimens from the ice. The cold, the ice, and the food supply were all concerns and the men began hunting seals and penguins to supplement their diet. Through the routines, order and interaction, Shackleton managed the collective fear that threatened to take hold when the trip did not go as planned.  He knew that in this environment, without traditional benchmarks and supports, his greatest enemies were high levels of anxiety and disengagement, as well as pessimism. Meanwhile, the ship was a continuous victim of the ice flows around it and at the mercy of the crushing mass. No amount of shoving could release the pressure of ice against the ship. The Endurance suffers irreparable damage and is beyond repair. Shackleton ordered the crew to abandon the sinking ship and to set up camp on the floating ice. The crew retrieved supplies and lifeboats from the Endurance until it finally sank on the second of November, leaving the men for another 3 weeks in this camp on ice calling it “Patience camp”. With conditions now more dire than ever, little to no food, and less daylight than darkness, Shackleton had to make difficult decisions. Knowing that no one was going to come save them, and that survival depended on him, he announced a new goal: “Ship and stores have gone — so now we’ll go home.” His plan was to use the lifeboats to make it to Elephant island, and so they did in April, when the ice broke up. The men crowded into 3 small lifeboats and sailed for a week through stormy seas. They eventually arrived exhausted, seasick, and dehydrated. But they took “childish joy,” one scientist wrote in his diary, “in looking at the black rocks and picking up the stones, for we had stepped on no land since Dec. 5, 1914.”

Nevertheless, it was not over yet, for this inhabited island sat far away from normal shipping lanes. Knowing his men were becoming desperate, Shackleton decided to attempt navigating with a team of five towards South Georgia, the island where they initially departed the journey. Before leaving 22 men behind, Shackleton wrote a note to his second in command, stating that the moment he leaves this island, command is passed down to him, confiding in him the responsibility of the crew’s survival. Facing the ocean in a tiny lifeboat for sixteen days, Shackleton and his team reached the island where they spent two days attempting to land on shore. They were on the other side of the island and Shackleton trekked all the way to the whaling station to get help. Almost immediately, he started planning the rescue mission to save his crew. It took him 4 months and 3 attempts before he was finally able to find them. He sees a signal fire, and, on the beach, all 22 man have survived. “I have done it,” he wrote his wife, Emily. “Not a life lost, and we have been through hell.”

The story speaks for itself when it comes to interpret Shackleton’s leadership. In the name of dedication to his goal, he had made the mistake of pursuing the journey, disregarding the warning he was given. But when the Endurance got trapped in ice, Shackleton was able to alter his goal based on the circumstances. Having to constantly make tough decisions, Shackleton adjusted plans according to new information and didn’t shy away from changing it, no matter how much time he had spent developing it. He was a leader under times of great uncertainty and focused on his expedition’s survival. Before this expedition, he was already known for his ability to bring himself out of tight situations. And on this expedition, he proves to be an ideal leader and insightful manager. Between keeping his crew on strict daily routine and imposing reading, singing, and interacting to pass their long nights, Shackleton uses positive morale to keep his crew alive. It was his capacity to redefine his purpose and plans as the circumstances shifted.

Although he personally felt concerned with how desperate their situation was, he kept that from his crew and managed his own emotional intelligence to keep his courage and confidence high. His perseverance encouraged the crew to keep striving for survival, and his optimism was contagious. He intentionally made decisions to inspire optimism in his crew. He was enthusiastic and clear in his vision. When the winter clothing was distributed, Shackleton ensured the crew were supplied before the officers and during one horrendous boat journey he gave his mittens to a desperate colleague. Through the servitude to his crew, he put the goodwill of his men above himself. This led his crew to believe in him and in his capacities to bring them home alive. Shackleton knew that, without the team, they could never reach their goal.

In order to understand his men, he took the time to know each one of them personally, and discovered their strengths, weaknesses and what motivated them. He was cautious and prudent into taking risks and was good at improvising, not afraid to abandon plans if they failed. He understood the importance of teamwork and to avoid troublesome build-up of cliques he insisted his men do not spend longer than a week in the same tent with the same men. Thinking of every detail, he also took the time to care for anyone struggling while treating all his men justly and equally. His loyalty to his men was reciprocated back to him. Ernest was a brilliant and charismatic leader who showed courage and patience. Although his expedition did not accomplish the goals initially set to it, but it is an amazing example of leadership.

Zoom Conference with Alex Havard on “Magnanimity in Hardship” Nov...
Scroll to top