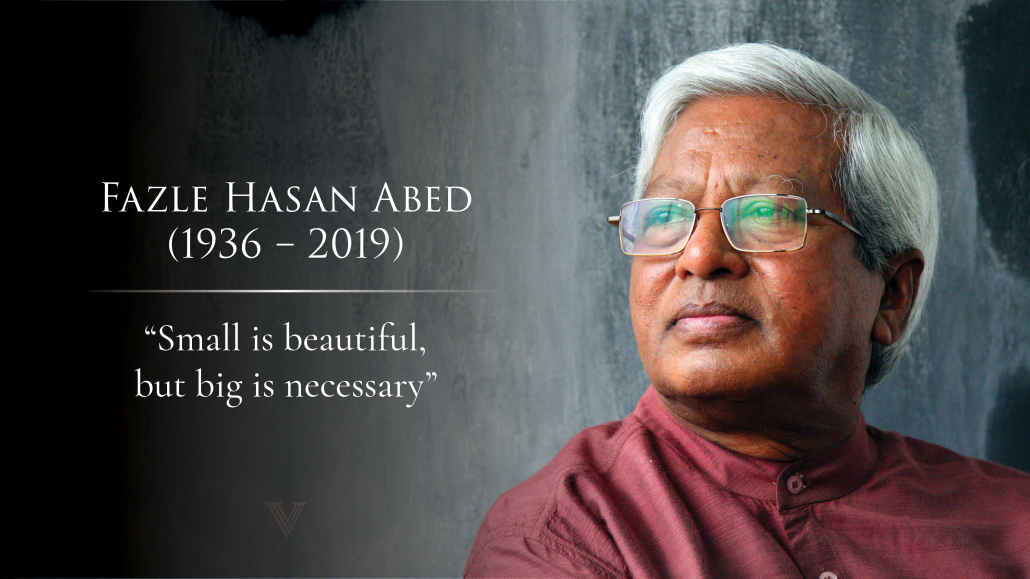 “Small is beautiful, but big is necessary.”

An ambitious young man left his home country at the age of 18 in the hopes to study, graduate, and make his own, successful path professionally. After attending university to study Naval Architecture, he realized there was little work in ship building in his home country, which is where he wanted to work. Therefore he joined the Chartered Institute of Management Accountants in London, completing then his professional education. Returning to his country, he joined a company where he quickly became the head of its finance division. But why would a successful man with a good start in his career give it all up?

Sir Fazle Hasan Abed ceased to be interested in his corporate executive’s life after facing the devastating effects of a cyclone which hit Bangladesh, his home country, killing 300,000 people and leaving millions more homeless. Taking initiative, he and his friends provided relief and rehabilitation to the worse affected. Shortly afterwards, civil war broke and Abed returned to London where he did not sit helpless but instead started the nonprofit Action Bangladesh, which raised funds and lobbied governments across Europe to support the liberation of Bangladesh from Pakistan. Coming back to his now independent country, he was shocked at the country’s devastation: mass destruction, genocide, poverty and the return of 10 million refugees to a homeland without a home.

“The importance of having a good life, doing work in a multinational organization, seemed quite immaterial to me at that point.” – Sir Fazle Abed

Abed, who had moved to London during the conflict, sold a flat he owned there and used the money to provide food and build houses for people as they returned. He initiated this organization and helped improve the living conditions of the rural poor. In a matter of a few years his work led to the foundation of the non-governmental organization known as BRAC (Bangladesh Rehabilitation Assistance Committee, 1972).

“Small is beautiful, but big is necessary.” – Sir Fazle Abed

Sir Fazle, who was knighted by the British Crown in 2009, grew BRAC into the world’s largest non-governmental organization. BRAC has provided the opportunity for nearly 150 million people worldwide to improve their lives, have enhanced food security and follow a pathway out of poverty. He believed that he had to work at a bigger scale to be able to change the unfortunate circumstances of the people. Knowing that he could not depend only on donors for support, he introduced enterprises, such as milk processing and fish farming, that now cover part of BRAC’s operating costs. With a vision to working for a better future, Abed led BRAC’s operations to expand geographically and to become one of the largest NGO’s in the world.

“Everything we did in Bangladesh we did with one focus: getting poor people out of poverty because we feel that poverty is dehumanizing.” – Sir Fazle Abed

As BRAC grew, Abed, without losing sight of his mission, ensured that it continued to target the landless poor, particularly women, a large percentage of whom live below the poverty line with little or no access to resources or conventional development efforts. He maintained his focus on the least advantaged, saying it was his responsibility and the responsibility of the organization. Today BRAC has around 90,000 employees in 11 countries and aids more than 100 million people in gaining access to health care, education and microfinancing to start businesses and presenting programs spanning public health, economic development, education, agriculture, and disaster relief. Abed initiated new ways to tackle the problem of poverty, hunger and powerlessness among the poor through the development models, scientific innovation, and local participation.

“The inequalities that create divisions of rich and poor, powerful and powerless, are made by humans, so change is also possible through human acts of compassion, courage and conviction.” – Sir Fazle Abed

Sir Fazle, founded numerous projects, including health, agriculture, and education. He believed that oppressed groups could free themselves from poverty through hard work if they were given the right conditions to succeed. One example of that would be the microfinance project. Microfinance involves organizing poor individuals within a community into groups, encouraging them to save, and lending them small sums of money for which they are jointly liable. (Microfinance Interventions to Enable the Poorest to Improve Their Asset Base – Fazle Hasan Abed). But BRAC decided to help the ultra poor; by that we mean people living on less than 35 cents a day. To be able to help them through microfinance, Abed had to build-up their capacity to fully use such mainstream development intervention. For that he used the transfer of assets (such as livestock) or any resources that would generate an income for them; until they start to maintain a habit of saving money through a sustainable flow of income. Then they can become microfinance clients. BRAC has distributed USD 1.5 billion in micro loans as one of many of its projects to help the poorest people in Bangladesh graduate out of extreme poverty.

Another one of BRAC’s objectives was to help the woman and children. This mission was shaped due to Abed’s personal experience. Having lost his mother and sister who died young as well as his first wife, Abed wanted to improve women’s well-being as well as work on gender equality. He believed that they could play a huge role in diminishing poverty. He established Aarong, a retail chain where rural artisan women produced hand crafts. Today, Aarong impacts the lives of more than 300,000 people, giving them access to BRAC’s support programs like mental health care, legal aid, hygiene awareness and education for their children.

In Bangladesh, there was an increasing child and infant mortality rate which he also tried to fight. At the time diarrheal diseases were the reason infants were dying. Through BRAC, he taught every mother how to make a home-made solution that would prevent those children’s death. This helped to decrease the mortality death rate among children, a revolutionary act. More than that, BRAC extended its work into the educational field, to allow children to go to school. Today most of the children in Bangladesh go to BRAC schools. They provide learning opportunity as well as trauma recovery programs for children who were displaced or refugees.

Through his mission and the means to achieve it, we can notice how much of a virtuous leader Sir Fazle Abed was. Leaving a career behind to help others needs courage, humility and prudence, all of which Sir Fazle practiced. Through empowering the least advantaged and bringing out the best in them, he showed humility. After having started a very small initiative of help, he kept striving for something greater and bigger without losing sight of his mission; he eventually impacted the lives of millions of people. This magnanimous vision and work he has done impacted millions of lives, giving them the chance to fight their misery.