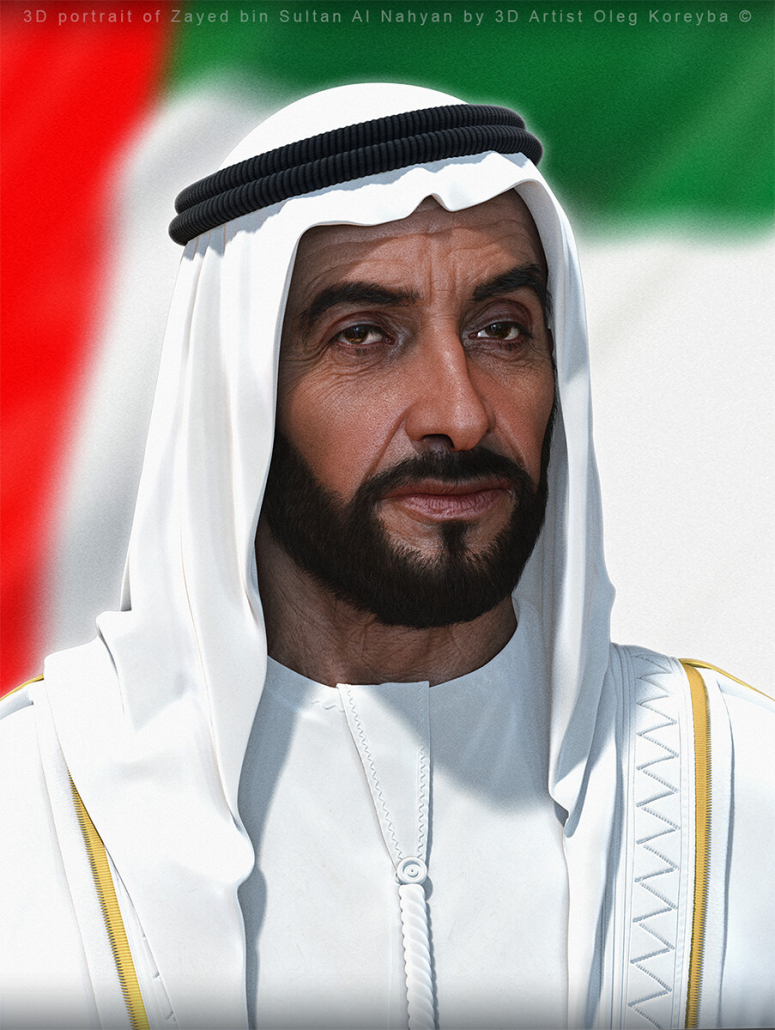 “Wealth is not money. Wealth lies in men.”

Sheikh Zayed was a magnanimous, humble visionary leader who transformed the desert into a green heaven, and united people under one nation. “My wealth is the happiness of my people”

Sheikh Zayed bin Sultan Al Nahyan served as President of the United Arab Emirates (UAE) since the formation of the Federation on December 1971 and as Ruler of the Emirate of Abu Dhabi since 1966.

Understanding or talking about the United Arab Emirates (UAE) is impossible without understanding the life of its founder sheikh Zayed and his deep religious faith, prudence, justice, wisdom and generosity; determination, hard work and humility devoting his life in the service of his people and creating a better world for them.

Born around 1918 in Abu Dhabi, Sheikh Zayed was the youngest of the four sons of Sheikh Sultan bin Zayed Al Nahyan, Ruler of Abu Dhabi. By that time, the Emirate was poor and undeveloped, with an economy based primarily on fishing and pearl diving and on simple agriculture in scattered oases inland. Life in the desert was simple but harsh due to the arid climate that made survival often a major and education was generally confined to lessons in reading and writing, along with instruction in Islam from the local preacher.

In 1946 he became Ruler’s Representative in the Eastern Region of Abu Dhabi, centered on the oasis of al Ain. His vision became clear, he wanted to transform the formerly dry and rocky area into a lush green land and to preserve its heritage and its wild life. Sheikh Zayed gained a reputation as a natural born leader who ruled by example. He said: “With God’s will, we shall continue to work to protect our environment and our wildlife, as did our forefathers before us.”

One of the first instances showing his practical wisdom was when he decided to rebuild the irrigation channels that underpinned the country’s all-important agriculture sector. He found that this system had gradually fallen into disrepair pushing the farming families to move to the coast. Sheikh Zayed took the risk and borrowed money from those closest to him to invest in a program of rebuilding this irrigation system that would not only benefit the farmers but also create job opportunities. To turn his vision into reality, he summoned prominent experts from around the world who renovated, expanded and modernized the traditional water resources thus providing free water and expanding the date palm tree plantation.

The greening efforts were complemented by the strictly enforced wildlife conservation by restoring endangered species and reintroducing them into well-protected reserves. Al Ain Zoo was part of this initiative. The continuous expansion of the nature reserves, creation of artificial lakes and the non-stop greening of the country have turned it into a garden in the desert. With his faith and trust in God acknowledging his talents and potential, the vision became a reality. He said: “They used to say that agriculture has no future, but with God’s blessing and our determination, we have succeeded in transforming this desert into a green land.”

The discovery of oil in the late 1950s reversed the whole economic formula in the Gulf region, as it marked the real start of its development. Sheikh Zayed was chosen as the new ruler of the Emirates in 1966. Another instance of Zayed’s prudence was his decision to lay the oil pipeline across miles of Abu Dhabi desert. This was something never been thought of before. Sheikh Zayed was given the charge of keeping peace between the oil companies and the Bedouins, who were still suspicious at this alien invasion of their lands. And he managed to convince them with his wisdom and exceptional way of negotiating and convincing.

He was a patriotic leader who honored his past, acknowledging the importance and role of his ancestors. He said: “He who doesn’t know his past cannot make the best of his present and future for it is from the past that we learn.”

Sheikh Zayed believed in the power and importance of education which was very minimal at his time, therefore he personally funded the first school in the Emirates with the contribution of his relatives and friends. He believed in the youth and he empowered them. Education shifted from the religious system to a modern educational system and literacy classes were held for those who had not previously benefitted from education. He said: “education is a lantern which lights your way in dark alleys”, and

“The biggest asset of any advanced nation is its educated people. The progress of countries and nations can only be measured by the level and extent of their education.”

He emphasized and pushed the young generations to work and serve their country, he was an example of leaders who achieved greatness by bringing out greatness in others: “It is my duty as the leader of the young people of this country to encourage them to work and to exert themselves in order to raise their own standards and to be of service to the country. The individual who is healthy and of a sound mind and body but who does not work commits a crime against himself and society.”

The founding father had a deep respect for the role played by women in society. He saw their potential, encouraged them to learn and educate themselves and stressed on the importance of treating women with dignity. “The woman is half of the society; any country which pursues development should not leave her in poverty or illiteracy.” UAE was the first Arab country to have introduced a mandatory female presence in boardrooms, and today 56 per cent of the science, technology, engineering and mathematics graduates in the country are women.  “I encourage women to work in positions that maintain respect and dignity as mothers and makers of generations.”

In less than five years the UAE was able to meet all the necessary requirements for its citizens. Sheikh Zayed had privately paid for the construction and the annual running cost of hundreds of schools. In addition to wisely using the country’s enormous oil revenues in building universities and hospitals allowing the UAE citizens free access to them. He believed that the resources of the country should be fully used to the benefit of all the people of UAE.

Sheikh Zayed believed in the dignity of man who accomplish God’s work on earth. He was an excellent listener and a just ruler who would give everyone his due.

When asked by The New York Times in April 1997 why there is no elected legislature, Zayed replied:

“Why should we abandon a system that satisfies our people in order to introduce a system that seems to engender dissent and confrontation? Should they seek alternatives, we are ready to listen to them.

We are all in the same boat, and they are both the captain and the crew. Our doors are open for any opinion to be expressed. It is our deep conviction that God has created people free, and has prescribed that each individual must enjoy freedom of choice. No one should act as if they own others. Those in the position of leadership should deal with their subjects with compassion and understanding, because this is the duty enjoined upon them by God, who enjoins upon us to treat all living creatures with dignity. How can there be anything less for mankind, created as God’s successors on earth?”

Throughout his life, Sheik Zayed treated people with the uttermost respect regardless of their nationality, gender, status or religion. He allowed practicing religions other than Islam, thus breaking all boundaries and opening a new gate towards coexistence and respect that was not familiar in Arab Muslim countries.

This led the way 15 years after Sheikh Zayed death for the first-ever papal visit to the Arabian Peninsula. Pope Francis landed in Abu Dhabi and was welcomed by Sheikh Zayed’ son, Sheikh Mohamed bin Zayed, Crown Prince of Abu Dhabi and Deputy Supreme Commander of the Armed Forces. Pope Francis and Sheikh Ahmed al-Tayeb, the Grand Imam of Al-Azhar signed the historic Document on Human Fraternity on 4 February 2019 (https://www.forhumanfraternity.org/document-on-human-fraternity/). It highlights the need for a sense of fraternity amongst all men and women of goodwill who are invited to promote justice and peace, guaranteeing human rights and religious freedom. Furthermore, to inspire all people to live the values of human fraternity, the Higher Committee for Human Fraternity (HCHF) was created: https://www.forhumanfraternity.org/ .

Another example of his justice, and respect for humans, is that he highly valued the role of the expatriates in the building of the UAE and created the vibrant, cosmopolitan society that the UAE remains today. He made the expats feel welcome in a beloved home to over 200 nationalities.

“Wealth is not money. Wealth lies in men. This is where true power lies, the power we value. This is what has convinced us to direct all our resources to build the individual, and to use the wealth which God has provided us in the service of the nation.”

“No matter how many buildings, foundations, schools and hospitals we build, or how many bridges we raise, all these are material entities. The real spirit behind the progress is the human spirit, the able man with his intellect and capabilities.”

Sheikh Zayed wanted to unite the emirates under one flag. He believed that for Arab countries to thrive, unity with neighboring countries must be achieved, realizing the importance of a strong union to make the future state durable on an international level. Sheikh Zayed became the leading force in the creation of a federation between the Gulf countries, together with Sheikh Rashid bin Saeed Al Maktoum, the Ruler of Dubai with whom he signed an agreement in 1968. The Emirates were united under the name of United Arab Emirates (UAE) and Sheikh Zayed was elected its ruler in 1971, he was the president, the builder and the caring father of the nation. By keeping a close eye on the growing nation, he was able to distribute Abu Dhabi’s oil wealth to the sectors that were most in need of development and to ensure a stable social status to all citizens.

Sheikh Zayed in his humility, humanitarianism and respect gained the trust of the international community and managed to establish the Emirates as a global player among the modern industrial countries. He combined the image of a modern statesman with the characteristics and values of a traditional tribal leader. Sheikh Zayed recognized the importance of creating a diversified economy. He said: “We must not rely on oil alone as the main source of our national income. We have to diversify the sources of our revenue and construct economic projects that will ensure a free, stable and dignified life for the people.”

Sheikh Zayed held a firm belief in Arab solidarity, in particular he felt it was his duty to use his personal and political weight in both the Arab and international arenas to achieve a just and durable peace in the Middle East. Accordingly, he supported Egypt and Syria in the 1973 war for the liberation of the Arab occupied territories in Palestine by imposing an oil boycott as an effective weapon, and making his famous declaration: “Arab oil is not dearer than Arab blood”.His watchword is peace, not confrontation. His problem-solving abilities were exceptional and he was known for his charismatic character and infectious optimism.

During his forty years of rule the country was transformed from a stunted conglomeration of seven emirates into a strong modern nation with one of the highest GDP in the Arab world and a state-of-the-art infrastructure and social system.

His death on November 2, 2004, marked the end of an era for the United Arab Emirates, but a lifetime legacy of greatness.