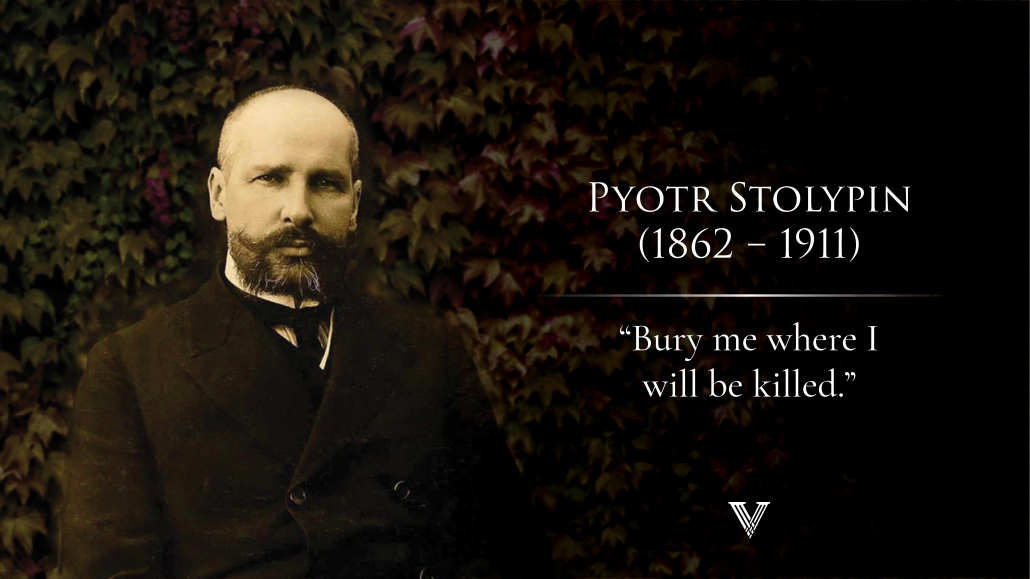 “Bury me where I will be killed”

Pyotr Stolypin was probably the greatest Russian leader of the Tsarist period. He served as prime minister of Russia under the last Tsar, Nicholas II. His agricultural reform program which consisted of giving the Russian peasantry a stake in the economic system provoked the bitter opposition of the Socialists, who had no desire to see the Tsar carry out a reform to benefit the very constituency whose disaffection they sought to exploit. No less opposed were the powerful landowners, who feared an empowered peasantry would put an end to a centuries-old social system that was the source of their power. Eleven terrorist attempts on his life failed to deter Stolypin from his efforts to reform Russian agriculture. He remained true to his conscience, his mission, and his people. Hours after a terrorist bomb exploded during a reception at his home killing 27 people and injuring 32, including two of his children, Stolypin, though barely recovered from the blast, repaired to his study to work on his reform proposal far into the night. With Russia on the brink of catastrophe, he understood that his duty as head of government was to drive through a sweeping reform of Russian life. For Stolypin, the good of the nation outweighed his personal sorrow: in the terrorist attack, his fourteen-year-old daughter Natasha was left disabled for life. He knew that the only way to keep himself and his family out of harm’s way was to resign his office, but he had no intention of acquiescing to terror. He wrote in his testament, “Bury me where I will be killed.” Stolypin was alone in his struggle, but he never gave up. He carried on with his mission until he was assassinated in September 1911 by Dmitri Bogrov, a shadowy figure with links both to revolutionary terrorists and the Tsarist secret police. This is endurance.