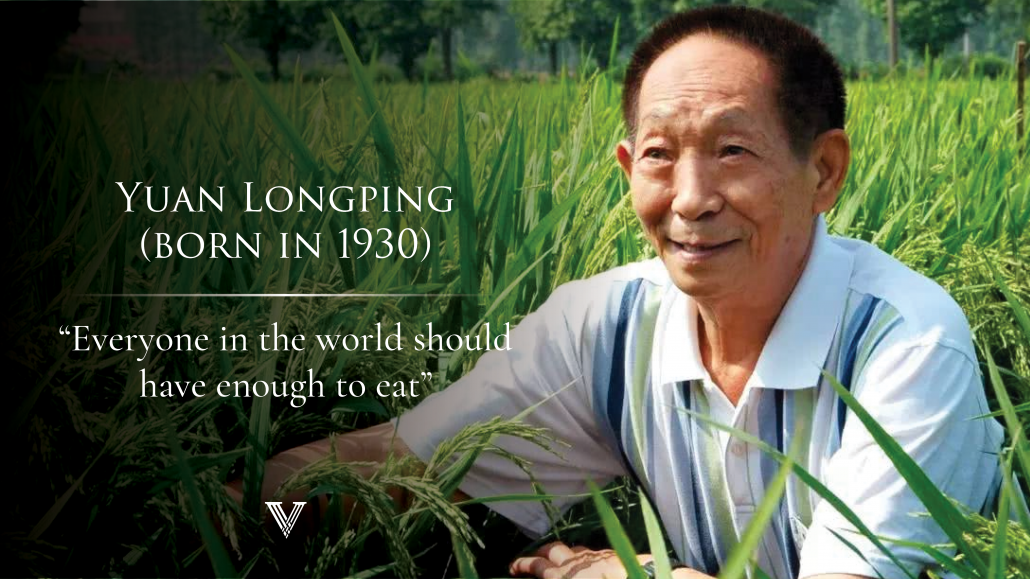 I once dreamt that the super hybrid rice in the experimental field grew taller than sorghum, its ears were longer than brooms and its grains were as big as peanuts. I enjoy the coolness under its shade. I hope my dream will come true, so that .” — Yuan Longping

Yuan Longping is a Chinese agronomist, known for developing the first hybrid rice varieties in 1973. Hybrid rice varieties due to their heterosis effects could increase yield by 20-50 percent over inbred varieties. For his contributions, Yuan has been called the “Father of Hybrid Rice”

Magnanimity is one of the basic virtues that virtuous leaders need to possess, which means to devote themselves to great Mission.

Yuan Longping has a lofty sense of mission. When he was young in 1960, China was experiencing famine. He had seen five people starve to death and fall on the side of the road. “That scene was really miserable. They were all my fellowmen, they had nothing to eat and starved to death. This touched me a lot, “he said.” so I made up my mind to study rice, hybrid rice and super hybrid rice. The motive and purpose are very simple, just to make more people have enough to eat. ”

Another basic virtue of a virtue leader is humility. Humility means to overcome selfishness and habitually serve others. Yuan Longping devoted himself to serving others. He often said, “No matter how good a person is, it will not work if he is too selfish and has no feelings for society and people.” While committed to great goals, Yuan Longping also encouraged his students to do so, reminding them to “serve others wholeheartedly.”

Although he has won various awards and honors for his work, he still led a simple life, calling himself an “ordinary person” and still participating in research in the field at the age of 80.

At the same time, he also possesses the virtues of prudence and fortitude of a virtuous leader.

He prudently made the right decision based on his own observation, rather than going with the tide. In the 1950s, some scholars in the Soviet Union and China used political means to establish the “theory” of Ivan Michurin and Trofim Lysenko as absolute authority and truth, while Mendel and Morgan’s genetic theory was regarded as heresy and criticized by the domestic scientific community. Although Michurin and Lysenko’s traditional theory of “asexual hybridization”-“asexual hybridization can improve varieties and create new varieties” were the dominant thought that monopolize the domestic scientific community thinking, Yuan Longping undertook many experiments according to this assertion and found out nothing. He began to doubt the correctness of “asexual hybridization” and decided to change direction and explore the theory of Mendel and Morgan’s genetic genes and chromosomes to study rice hybridization. As a result, the improved hybrid rice was successfully cultivated.

He also courageously persevered with his research direction, even when it went against the current, and he resisted opposition and ridicule from the others. Yuan Longping’s idea runs counter to the traditional classical view of genetics. At that time, the book “The principles of Genetics” co-authored by renowned American geneticists E.W. Sinnot and L.C. Dunn , clearly pointed out that there is no advantage in rice hybridization.

So rice was generally considered to have no heterosis at all when Yuan Longping put forward the research subject of hybrid rice. Many pundits and scholars believe that he was beyond his limits. He was surrounded by opposition and even mockery. He said, “people say that I am wasting my time, but I don’t care.” From then on, he firmly chose the scientific research subject of hybrid rice.

Under many difficulties and obstacles, Yuan Longping finally cultivated the hybrid rice with high yield in the 1970s, which broke through the research of previous scholars. Since then, hybrid rice has been grown in dozens of countries in Africa, the Americas and Asia, providing a powerful source of food for areas at risk of famine. At the same time, Yuan Longping also continues to inspire more people with the example of his virtuous leadership.