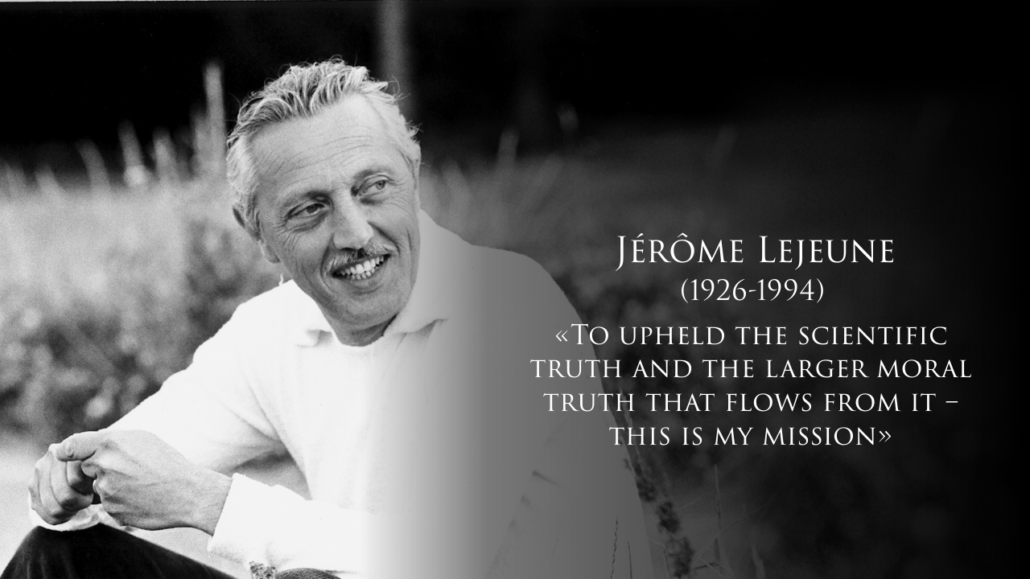 “To upheld the scientific truth and the larger moral truth that flows from it – this is my mission”.

Jérôme Lejeune is a great example of leadership in the field of science.

Jérôme Lejeune was the French geneticist who in 1958 identified the genetic defect that causes Down’s Syndrome. He discovered that an extra copy of chromosome 21 was responsible for the condition known as Down Syndrome.

Jérôme Lejeune’s research and clinical guidance changed the lives of many people. He took care of thousands of children with Down syndrome and he helped thousands of parents to love their children affected by this genetic disorder.

Lejeune was magnanimous. Soon after his discovery, which opened up entirely new paths in genetics, he began his fight for the pro-life cause. His discoveries in genetics led him to understand and affirm the unconditional dignity of the human being. Lejeune created a culture of life in the heart of a culture of death, which spread in Europe and America towards the end of the 1960’s.

Lejeune, who is considered the father of modern genetics, became one of the moral leaders of the pro-life movement in the world. Lejeune upheld the dignity of human life at a time when courts and tribunals and parliaments were usurping the divine right to determine who shall live and who must die.

For Lejeune, the legalization of abortion was not just morally objectionable; it constituted an assault against science. Genetics demonstrated that at the very moment the ovum is fertilized by the sperm, all of the genetic information that defines the resulting individual is already inscribed in its entirety in the first cell. No new genetic information enters into an egg at any stage after its initial fertilization. Genetic science postulates that a human being could not be a human being if not first conceived as a human being. Laws legalizing abortion rest on a theory of embryonic evolution. This theory claims that the embryo is not a human life but becomes one later on. This theory is false, it is an ideology with no basis in genetic science.

Jérôme Lejeune spoke the truth fearlessly and tirelessly. He said: “Life is a fact and not a desire… If a law is so wrong-headed as to declare that ‘the embryonic human being is not a human being’, so that Her Majesty the Queen of England was just a chimpanzee during the first 14 days of her life, it is not a law at all. It is a manipulation of opinion, and has nothing to do with truth. One is not obliged to accept science. One could say: ‘Well, we prefer to be ignorant, we refuse absolutely any novelty and any discovery.’ It’s a point of view. I should say, it’s a ‘politically correct’ point of view in some countries, but it’s an obscurantist point of view, and science abhors obscurantism.”

In view of the moral relativism and intellectual skepticism so prevalent in the European culture of his and ours, Lejeune’s cause seemed doomed from the start. But Lejeune’s realism was inspired by a formidable hope.

Lejeune practiced not only magnanimity, but also humility, which is the second specific virtue of leaders. Humility is about service. Lejeune was a servant of humanity and a servant of his followers. He inspired and still inspires people of good will, people who are not indifferent to scientific and moral truths. Twenty years after his death Lejeune still brings out the greatness in people by helping them understand and delight in this beautiful scientific truth: a human being is a human being from the moment of conception; a human being is not a chimpanzee and has never been a chimpanzee.

Lejeune practiced magnanimity and humility. He also practiced the virtues of courage.

In fact Lejeune was a paragon of endurance in the battle for life. With his discovery in 1958 he became world-famous and was touted as a possible recipient of the Nobel Prize. But Lejeune loved the truth more than the Nobel Prize, which is no doubt why he did not win it. Instead he began his long and lonely ascent to Calvary. At meetings he was assaulted verbally, and sometimes physically. He no longer received invitations to international conferences on genetics. Funding for his research was cancelled. He was forced to disband his laboratory and research team. Thus, a man who at 38 became France’s youngest professor of medicine and held France’s first chair in fundamental genetics, a man who had a splendid future ahead of him full of honors, recognition, and power, found himself in the prime of life with no collaborators, no funding, not even office space. He was dropped by his friends, excoriated by the press, and made into a social pariah. He accepted this state of affairs with all serenity and with the joy of having given no quarter to evil. He died on Easter Sunday in 1994 after a brief but agonizing illness that began on Wednesday of Holy Week.

Lejeune inspired many people. In 1989, Baudouin, the King of Belgium, sought Lejeune’s counsel as the parliament was about to legalize abortion. At the end of their conversation, the king asked: “Professor, would it bother you if we prayed together for a moment?” A few months later King Baudouin abdicated his throne rather than sign a law legalizing abortion.

Lejeune’s work and testimony were impactful. Bernard Nathanson who was the founder in 1969 of the “National Abortion Rights Action League”, became a pro-life activist in the 1980s. He is often quoted as saying abortion is “the most atrocious holocaust in the history of the United States”. Norma McCorvey who was the plaintiff in the American lawsuit Roe v. Wade, which led to the decriminalization of abortion in the US in 1973, became a pro-life activist in the 1990s. She said, “When I saw one day  the picture of a tiny, 10-week-old embryo, I said to myself, that’s a baby! It’s as if blinders just fell off my eyes and I suddenly understood the truth — that’s a baby! Abortion was about children being killed in their mother’s wombs. All those years I was wrong. Working in an abortion clinic, I was wrong. Abortion — at any point — was wrong. It was so clear. Painfully clear.” Bernard Nathanson and Norma McCorvey stories show us that Lejeune did not work in vain.

Lejeune is for ever one of the greatest virtuous leaders in the field of science.