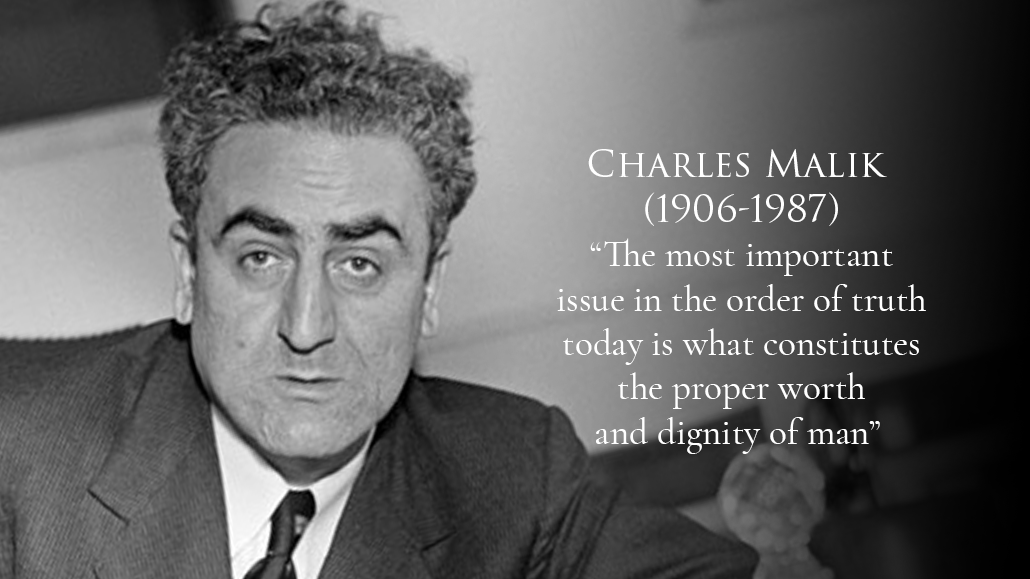 Dr. Charles Malik was a Lebanese diplomat, academic, philosopher and theologian. As an international statesman, he was the first Lebanese representative in the United Nations and later achieved the successful drafting of the 1948 Universal Declaration of Human Rights.  To be able to define the Human Rights and fundamental Freedoms of man, people had to agree on the concept of “dignity of man”. Malik stressed the idea that human beings are created by God with a natural and immutable dignity. He was persistent. He showed empathy to understand and include the opinion of the 58 different members in the process of creating the United Nations Charter. He greatly valued the opinion and dignity of each person. He wanted to restore  “a sense of responsible, authentic, personal dignity to the individual human being” worldwide against the tyranny of ideological systems. Malik fought against both communism and capitalism. He had a grand vision of the human person. Ambassador Mary Ann Glandon explains: “Malik saw man as uniquely valuable in himself, but as constituted in part by and through his relationship with others – his family, his community, his nation, and his God”. As we can see, Malik practiced magnanimity, humility, justice, courage and self-mastery at the highest level. Malik was convinced that only people who recognized the face of God in each person and who possessed moral leadership could deal with Human Rights.

Charles Malik gave a fundamental importance to the family in the Universal Declaration; he took his family along everywhere he went and passed a great deal of his knowledge and beliefs to his son.

Malik wanted “absolute respect of differences of opinions and beliefs”. He wanted you to be “free to become what your conscience requires you to become in light of your best knowledge”.

After returning to his country, Malik had many Lebanese political roles such as Minister of National Education and Fine Arts and Minister of Foreign Affairs. His most influential role was during the Lebanese civil war of 1975 during which Malik emerged as a defender of the free Christian cause. He helped found the Lebanese Front and its ideology while also becoming a pioneer of Lebanese Patriotism. He strongly believed that Lebanon “is an invaluable and not compensated treasure”.

Malik strove for Christian unity on the world stage—inspired by his country’ diversity in faith—to bring together the three key confessional segments of the Christian Church (Orthodox, Catholic and Protestant). He obtained a doctorate in philosophy at Harvard University (1937) and served as the president of the World Council on Christian Education (1967-1971).

Malik was convinced that “the chief obstacle to the Christian religion today lies in the sphere of the intellect”. One of his many books on this topic clearly summarizes his goal: The Two Tasks of the Christian Scholar: Redeeming the Soul, Redeeming the Mind. Another is his book A Christian Critique of the University. He wanted students to bring light and order to their minds. This came as a response to the anti-intellectualism threatening the world including Christian circles alongside all the discordance resulting from ideologies such as materialism, hedonism, cynicism, indifferentism and atheism.

Malik signified the strategic role of the university as a place where Western society and culture are formed through teaching and preparing future political leaders. He thought a great danger that is facing the youth is a lukewarm or brain-dead Christian faith which cannot hold its own in any confrontation with non-Christian philosophy. As a philosopher, Malik believed that philosophy is the most influential field for thought and intellect, for it is the foundation of all the other fields of study at the university because it deals with the first principles.

Professor Charles Malik was a truly virtuous leader. He embraced both humility and magnanimity as a lifetime ideal while devoting his entire mission towards achieving great goals for the common good of humanity.

“Leadership in the Family Environment”