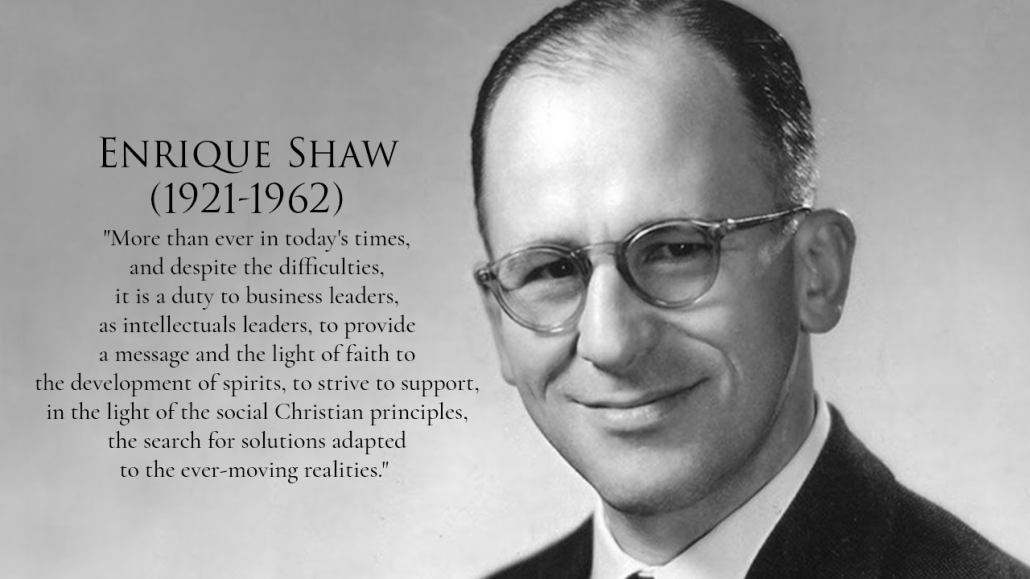 When Enrique Shaw (1921-1962), the Argentinean businessman and founder of the Christian Association of Corporate Leaders, was dying of cancer, 260 workers came to the hospital to give blood for a life-sustaining transfusion…

Enrique Ernesto Shaw, was born in Paris on February 26, 1921. He studied in Argentina at La Salle school.

On January 2, 1936, at the age of fifteen, he started his studies in promotion No. 66 of the Naval Military School, where he performed a short and outstanding career, characterized by his strong sense of duty and service. He graduated as the youngest naval officer in Argentine naval history.

On October 23, 1943, he married Cecilia Bunge, and they had nine children.

At a young age, Shaw began a practical search on how to improve the employment and workers critical situation.

As a navy officer he was sent in 1945 to the United States to study meteorology. He was tempted to be a blue-collar worker, but he came to understand that he should devote himself to the evangelization of the business community.

Enrique prepares himself for this big change. He returned to Argentina. He had different positions of high responsibility in Rigolleau Glassworks (Corning Glass, manufacturers of Pyrex). He remained in Rigolleau S.A. until his death.

Upon his return to Buenos Aires, he faced the restrictions on individual freedom and the private initiative imposed by the newly constituted regime of President Perón, and the pressures of workers unionism arising from it.

The concrete result of his concern about improving the status of workers is the development of a bill to create a Compensating Family Allocation Fund for employees and industry workers. The project, developed by Enrique Shaw through ACDE was enacted in July 1957 as Decree Law No. 7.914.

He participated in the founding of the Universidad Católica Argentina, and joined the first Board of Directors as Treasurer.

Enrique worked with several important leaders of the European social democracy of the post-war period, such as Adenauer, Schuman and De Gasperi. He promoted in Argentina and South America advanced labor laws.

His status as leader of the business union in Argentina led him to publish several works that reveal how much interior reflection Shaw had dedicated to his status as a Christian entrepreneur. For this purpose he wrote “The Mission of Business Leaders” (Bs. As., 1960).

“More than ever in today’s times, and despite the difficulties, it is a duty to business leaders, as intellectuals leaders, to provide a message and the light of faith to the development of spirits, to strive to support, in the light of the social Christian principles, the search for solutions adapted to the ever-moving realities.”