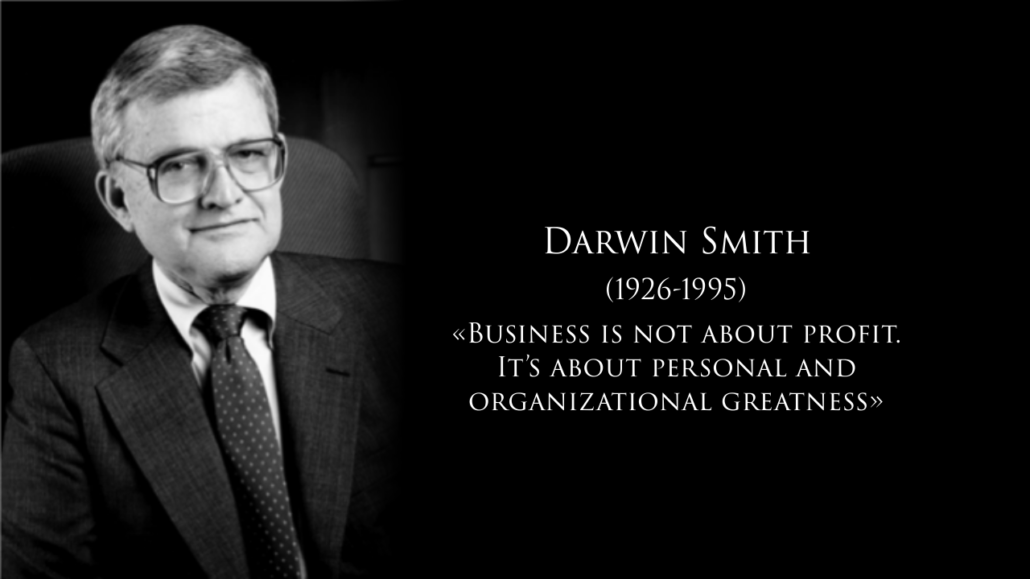 “Business is not about profit. It’s about personal and organizational greatness”

Darwin Smith, the mastermind of Kimberly-Clark’s remarkable turnaround, is a good example of a businessman who practiced the virtues of magnanimity and humility, which are the virtues specific to leaders.

In 1971 Darwin Smith became CEO of Kimberly-Clark, whose core business had been the production of coated paper. Smith inherited a company that for one hundred years had been good, but never great.

In 1971, the firm was on the ropes. The value of its stock had fallen by some 40% over the previous twenty years as its principal business—the production of coated paper—had become an enterprise with low margins.

Smith concluded that coated paper as a business was in inexorable decline, whereas consumer paper-products, though highly competitive, was on the upswing. Smith reasoned, if Kimberly-Clark were to go toe-to-toe with such world-class competitors as Procter & Gamble, this would force it to achieve greatness or perish. Smith decided to sell the mills and throw all the proceeds into the consumer business, investing in brands like Huggies and Kleenex.

Wall Street analysts and business commentators excoriated him, calling the move a gross miscalculation, and predicting the firm’s imminent collapse. How could such a mediocre company take on the giants of the consumer paper sector?

Smith remains largely unknown. A reserved man, he shunned any attempt to shine the spotlight on him, preferring instead to direct attention to the company and its people. He showed none of the swagger that characterizes many of today’s high-profile CEOs, and he never viewed himself as a great hero.

But Smith is without doubt one of the greatest business leaders of the twentieth century. He practiced magnanimity when he said: “we will achieve greatness or perish”. His sense of personal worth and dignity, which is a sign of magnanimity, instilled in him an ill-disguised contempt for the opinions of business analysts and media pundits. Smith, like Socrates, gave short shrift to the opinions of the chattering class.

Smith practiced humility, the virtue of service, in a beautiful way. He knew that the achievement of important organizational goals was not an end in itself, but only a means to the higher end of growth for all concerned. If Smith took great risks, it was because he knew that the personal growth generated by acting outstrips the potential material results, no matter how brilliant or lucrative. To get things done is management; to make people grow is leadership. Smith was an outstanding manager, but he was above all a magnificent leader. He cared more for people than for things. He was fully aware that personal excellence—his own, and that of the people he lead— is a greater good than material success.

Along with magnanimity and humility, Smith practiced the virtues of prudence and courage.

He practiced prudence when he foresaw that the consumer paper business was the future and as a consequence decided to sell the traditional core business of the company. This capacity to foresee the future is a part of the virtue of prudence, also known as practical wisdom.

Smith practiced courage in its two dimensions which are audacity and endurance. He practiced audacity when he turned his back on 100 years of corporate history and risked all on the thorough transformation of the business. He practiced endurance when Wall Street and the media derided him, and he stayed the course, and did not waver.

Smith was a virtuous leader. CEO’s who want to be leaders, have a lot to learn from him.