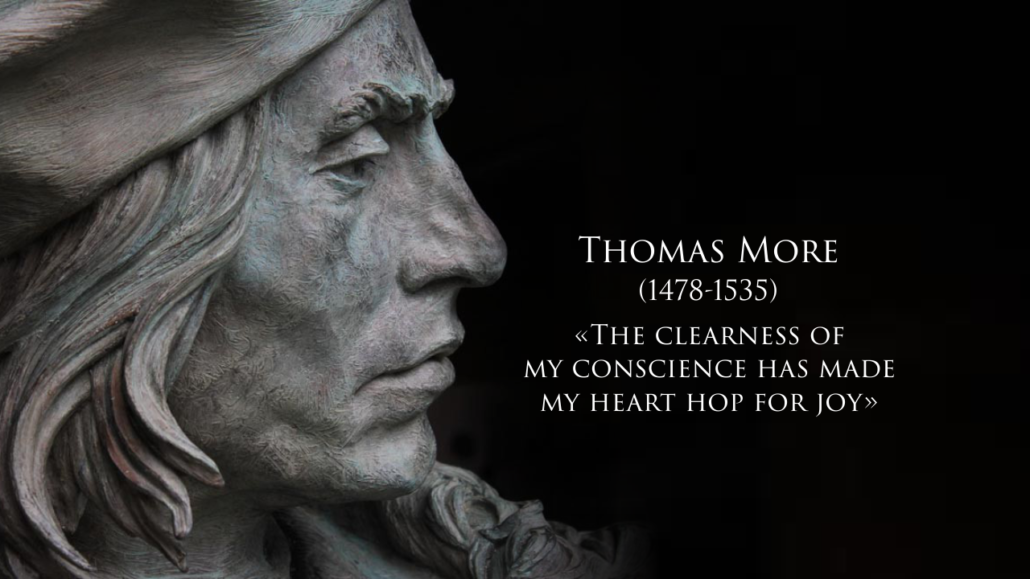 “The clearness of my conscience has made my heart hop for joy.”

Sir Thomas More, the Lord Chancellor of England under King Henry VIII, attorney and man of letters, was a model of leadership in politics. He practiced magnanimity and humility – the virtues specific to leaders – in a powerful way. Magnanimity is greatness, humility is service.

Thomas More believed politics were about loftier things than the pursuit of power and personal advantage. They were a form of service requiring professionalism, and personal preparation through the study of history, law, culture, and human nature in all its grandeur and frailty. Upon graduating from law school, he would spend the early morning hours of every day for 14 years studying the entire classical-Christian tradition in an earnest endeavor to find real solutions to life’s perennial problems.

As we know Sir Thomas refused to take an oath recognizing King Henry as self-proclaimed head of a new English church of his own invention. He stood fast in his convictions, although he was treated cruelly during his fifteen-month incarceration in the Tower of London, and despite the opposition of his king, the bishops of England, most of his friends, and his entire family. In the end Sir Thomas suffered martyrdom by decapitation.

Thomas’ magnanimity can be summarized in one word: conscience. Thomas More sacrificed everything that the world holds dear for the sake of his conscience. He opposed power’s attempt to command the conscience – the perennial temptation of political regimes in all times and places that recognize nothing as superior to themselves. Thomas More was willing to turn his back on success and political power, and unsavory compromises for the sake of fidelity to irrevocable principles, upon which depend the dignity and happiness of people, and a just and decent civil society.

“The clearness of my conscience”, said Thomas More, “has made my heart hop for joy.” Thomas practiced justice “for truth’s sake and his conscience”, wrote William Shakespeare in his last play King Henry VIII. His conscience was informed by the conviction that man cannot be sundered from God, nor politics from morality.

Like Socrates, Thomas refused to be led by the opinions of the crowd. This is magnanimity. Thomas despised resolutely the flattery of human respect, and resisted, in accordance with his duty, the pressure and blandishments of the supreme head of the state.

Thomas “was the person of the greatest virtue England ever produced”, wrote Jonathan Swift two hundred years after Thomas’ death. And in 1929 G. K. Chesterton wrote: “Thomas More represented a type, a turning point, and an ultimate destiny… He is more important at this moment than at any moment since his death, even perhaps the great moment of his dying; but he is not quite so important as he will be in about a hundred years’ time.”

Joan of Arc
Scroll to top