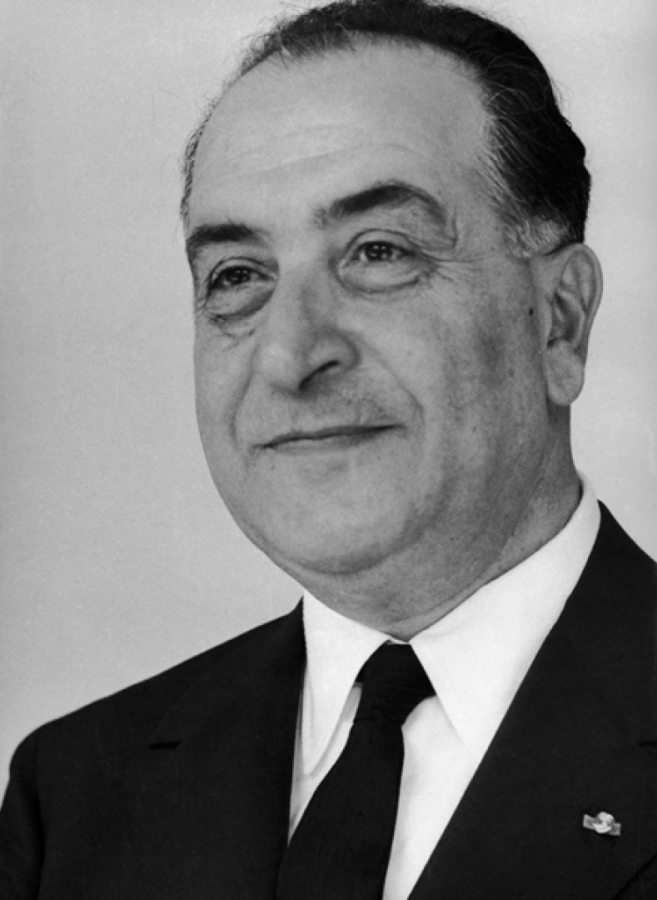 Fouad Abdullah Chehab was a Lebanese general and statesman who served as President of Lebanon from 1958 to 1964. He is considered to be the founder of the Lebanese Army after Lebanon gained independence from France, and became its first commander in 1946.

Chehab was prone to introversion and preferred nature and quiet to commotion and noise. Integrity and disinterest in wealth were perhaps his most distinctive features. He was an exceptionally good listener and had very courteous and refined manners. He spoke calmly and clearly, his words and thoughts were balanced, never imposing or aggressive, rather aiming to convince. His transparent sincerity and honesty inspired trust and respect to people meeting him. He was a magnanimous leader who dreamed big and transformed his great vision for his country to reality;” he saw in his mind’s eye a clear picture of the army as an invincible fortress for the country, and a clear picture of the country being on the same level of its people ambitions”.   Competing with time he accomplished in his period of presidency what none of other presidents could accomplish, he introduced and initiated large scale social development projects and reforms that brought stability and prosperity to the country.

Fouad Chehab was born to a poor family of noble ancestry forcing Chehab to leave school and work to support his family. In the beginning of the French mandate upon Lebanon, he went to Damascus to join the French Military School, graduating two years later as a Lieutenant. Defeating the status quo, he always aimed high and was eager to learn and improve. He was promoted to captain and continued his military courses in France to graduate from École Supérieure de Guerre in Paris and earned the title Lieutenant colonel. He served under the French Army till 1945 after the end of the French mandate he became commander of the Lebanese Armed Forces.

Chehab was a humble servant, up to 1958, he devoted himself to give Lebanon a strong Lebanese Army based on high values of national belonging, ethics, discipline, and efficient organization. All departments, from the headquarters and administration to the engineering, communication, and intelligence were restructured and modernized.

He believed in the power of education to bring out the greatness in others.

He raised the level in the Military School by sending young officers to enhance their military knowledge in French and English Military Academies.

When he was elected as president in 1958, Chehab’s mission was clear: To stop the violence, diffuse the tensions and restore harmony between Christians and Muslims. He held a tight rein on his country, transformed Lebanon into a modern state, the ‘State of Independence’ as he dearly called it. Witnessing a booming in economics, Lebanon’s literacy rate became the highest of all Arab countries. Business expended, the Lebanese people were united, proud and happy. Chehab formed the golden era of Lebanon.

Chehab practiced the virtue of prudence both in deliberation and decision; he knew that any adventurous step in a confessional context as delicate as Lebanon’s, would bring counter-effects on the long run. He based his actions on thorough planning, never on impulsive decisions. Furthermore, before taking action in his public responsibilities, he gave ample time to study the subject matter at hand in details, and asked for expert opinions, especially on issues that were not familiar to him. He was realistic in his assessments and his choices of actions, which were often based on healthy common sense.

President Chehab’s self-mastery showed remarkably wrapped with magnanimity and pure intentions. He was completely dedicated to his work, he spent his private time studying files and holding meetings to make sure all the work is done on time (he lost 17 kg during the 6 years of his mandate because of his heavy schedule and the pressure and tension of his duty). He was not interested in enjoying the extravagant privileges that come with authority and power. He never traveled abroad during his mandate. He viewed his presidency role as a mission to serve the people of his country. In this, he actually was the opposite of politicians usually driven by power ambitions and personal glories. His public appearances were restricted to the annual official occasions like the Independence Day. His, was a silent way of effective work. Political games, power seeking and adversities based on sectarian interests, were not a dynamism that Chehab looked for or fed on. He considered these practices, as diversions and distractions from the main and higher goal.

For Chehab true social justice meant that the development should reach all parts of the country especially the most deprived areas, and all segments of society.

To best protect the National Unity, Chehab followed a balanced foreign policy. He maintained friendly ties with the West, without being hostile to the Soviet Union. With him Lebanon assumed fully its Arab identity and took a neutral stand in regard to any inter-Arab conflict, encouraging solidarity and ‘brotherhood’ towards all the Arab countries.

Respecting and protecting constitutional legitimacy, democracy and public freedoms, are  principles that were highly sacred for Chehab. He was uncompromisingly faithful to ‘the book’ (the constitution) and the spirit of democracy that he deeply believed in. He refused during his mandate two law projects aiming to limit the press’s freedom.

As an army officer formed by the French military tradition, he belonged to a school of discipline, nobility, ethics and professionalism. Being a commander and builder of the Lebanese Army, he is respected and recognized not only for his strictness in enforcing discipline and his application of the rules but also for the human understanding and genuine caring towards his subordinates for whom he was a fatherly figure and teacher. He wanted the mind-set of the people to evolve with conviction, along with the changes at the institutional level.

As a Christian, he was a faithful believer and a compassionate person, he applied his religious principles and moral values to his personal life and to all his actions. He accomplished his duties free from personal interests, detached from the material world and lived a life of contentment sparing a regular amount of his simple salary (30%) to support people in need discretely. His mature Christian faith made him respect all other religions equally and keep a positive disposition for inter-religious dialogue.

Chehab was full of goodness and empathy. His best friend and confident was his wife, they shared the same beliefs and philosophical values. They both liked reading books on politics, history and spirituality, that they would later discuss. They liked to have kind of a limited social life and disliked outings.

Although he assumed the highest-ranking position in the state, Chehab died poor, just as he was born, with no riches or real-estate wealth but with an immortal legacy. He will remain the eternal flame illuminating the path of the Lebanese army and an example to follow in leadership.

Lebanese Prime Minister Salim Hoss said, “President Chehab started a political school of thought that was free of bigotry and that built on the past to bring about a better future. He saw his post as a mission, and didn’t use it for personal gain. He was a wise military man who was renowned for his loyalty to the country. He brought justice and equality to Lebanon and cooperated with neighboring Arab countries. He was honest and noble and his memory will never fade.”