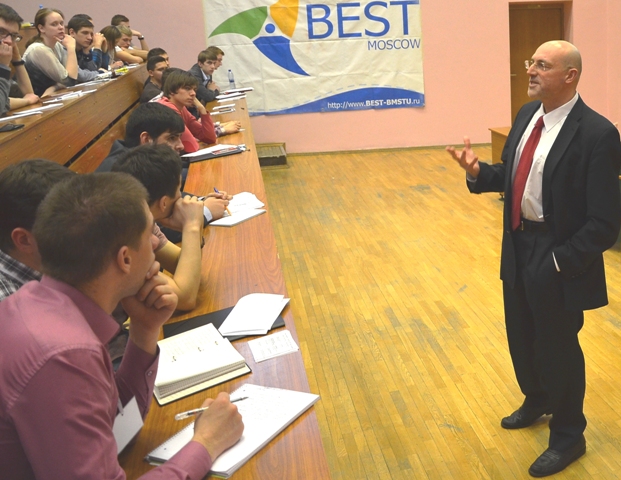 Many Bauman University’s graduates are world-renowned: Sergei Korolev for the first satellite in the space and first man and woman in the space, Andrey Tupolev for the world first supersonic passenger plane, Nikolay Dollezhal for the world first civil nuclear plant, Nikolay Zhukovsky for the foundation of aerodynamics and hydrodynamics sciences, Pavel Sukhoi for the foundation of Sukhoi Aerospace Design Bureau.

Bauman University is famous for its educational system called “Russian method” which unify a broad and intensive theoretical preparation with a deep practical education closely connected with industries. Presented on Universal Exposition in 1873 in Wien and in 1876 on Universal Exposition in Philadelphia this method won a gold prize. The President of MIT professor John Daniel Runkle wrote that Russian method will be undoubtedly applied as a principal educational system in MIT and all other American technical universities.

Alex Havard spend 3 hours with a nice group of some 100 students engineers and future missiles constructors who have a true passion for Virtuous Leadership, not less than students in business and management.

Want to join the discussion?
Feel free to contribute!